Shubinak traces its beginnings to a place where the world ends and Paradise begins:
The Chitral region of the Hindu Kush mountain range in Pakistan is one of the most isolated areas of the western end of the Himalayas (elevation: 1128m, population: 318, 689), and is surrounded by high mountain passes, deep green valleys , and ageless mountain glaciers which play a significant role in shaping these valleys. Chitral is located at the base of the towering Tirich Mir, the highest peak of the Hindu Kush; it is the fifth largest peak in the world. This mystical area is the familiar abode of giants and fairies since times immemorial. Its majestic hills still preserve the huge caves inhabited by the ancient giants called KASH and GABBAR.


The historical evolution of Chitral is a direct result of its foreign influences which include the Iranians, Arabs, Chinese, and Hindus. The Tartars Genghis Khan and Tamerlane also have major influences, as well as the armies of Alexander of Macedonia (Alexander the Great). Lawrence of Arabia also settled for a time near Chitral. The main language is “Khowar”, and the people are called “Khow”. Ninety percent of the people speak this language, and the other 10% speak Phalra, Gujari, Dameli, Gawar-Bati, Nuristani, Kalasha, Yidgha, Wakhi, Kirghiz, and Farsi.

The Chitral valley is one of the main arteries of the Silk Road (Baroghil Pass to China). The Lowari Pass (3,118m) is the southern and the Shandur Pass (3,734m – at the point where the road passes through) is the northern gateway to Chitral by road. The road journey from Peshawar takes 12 hours. Pakistan International Airline Fokker flights take 45 minutes from Peshawar and are dependent upon the weather.

A major attraction of Chitral is the Kalash Valley. Home of the Kafir Kalash, or “weavers of the black robes”, a primitive pagan tribe which practices a culture and belief and a way of life which dates beyond history. They are believed to be descendents of the armies of Alexander the Great who called the Hindu Kush “parapamisus” meaning mountains over which eagles can fly. The history and origins of the Kalash are shrouded in mystery; Alexander’s armies said that they were the descendents of Dionysus since they were already there and practicing beliefs similar to the Greeks when his armies arrived. Others believe that Chitrali’s are the descendents of the Europeans and even vice versa. 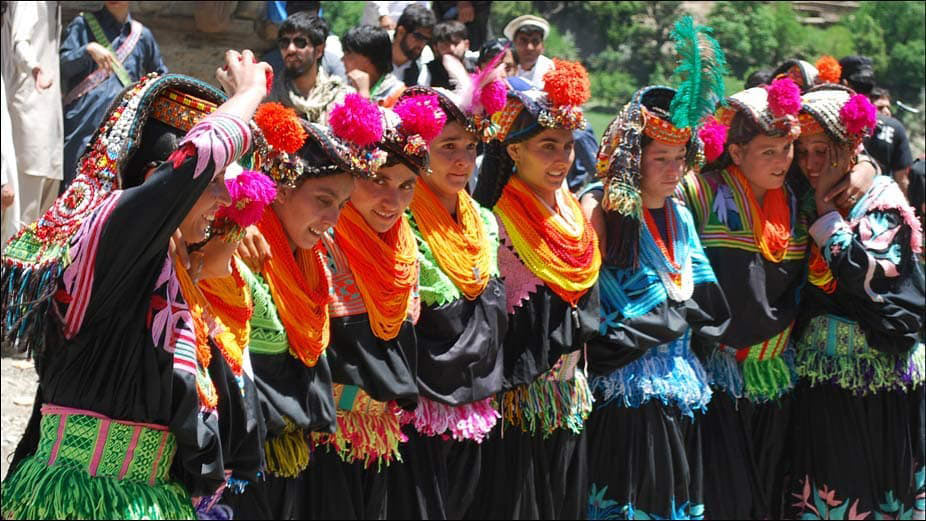 Still others believe that they came from Afghanistan since there were Kalash valleys there as well and before Afghanistan the theory is that they came from Siam, the area known as Thailand today, but the Kalash in Afghanistan were forcibly converted to Islam, which leaves just 3000 Kalashi’s still living in Pakistan. The women of Kalash wear a black woolen home spun dress, called a “Cheo”, with numerous beaded necklaces and an exceptional headpiece covered in cowry shells, bells, beads, and trinkets. Unique to the Kalash people are their cone-shaped baskets woven from goat hair around a structure composed of mulberry and wild almond branches. The Kalash are a very simple and innocent people who love to sing and dance.

The history of Chitral is ancient, and the handicraft of “Shu”, otherwise known as “Patti” is a continuation of Central Asian customs passed on from generation to generation. Surprisingly, the process of development of the tools involved in it has continued with very little change. The production of “Shu” can be dated as far back as 1500 B.C. while the rich tradition of “Shu” is deep-rooted in the remarkable culture, mythology and folklore of Chitrali society. 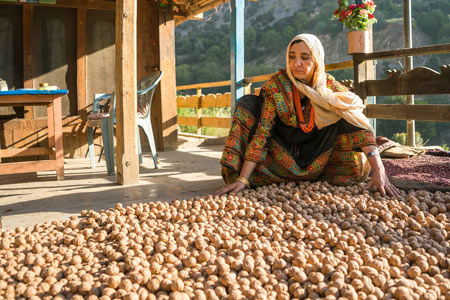 “Shu” is created in a natural environment by both the men and women of Chitral, each of who play an equally important role in the production of this handicraft. The economic cycle in Chitral is wholly different from other parts of Pakistan because of its location in the Hindu Kush. Spinning, weaving, embroidery, and hand-knitting are done in the comfort of one’s home during the cold weather. The production of handicrafts is often the only source of income for Chitrali households. Items are made with the materials available for their production as well as the existing means for producing them. The skilled hand has always enjoyed a high status in Chitrali society. An old Chitrali saying “Khowistan a aurat abaad” means “The land of the Khow is prosperous due to the efforts of the women” shows the admiration for women in Chitral. Knowledge and production of natural, hand-made items in Pakistan is not only an economic necessity, but a tradition which establishes society and the patterns of its existence.